I don’t generally write opinion based articles but the other day I came across an online story that caused me to chuckle and smile a little so I wanted to share my thoughts with you.

A staff writer at Business Insider wrote a piece on Benioff where he took a few shots at Microsoft (Satya Nadella).  After reading the article, the first image that came to mind was:

If you recall, just a few years ago, Benioff and Nadella had a bit of a bromance going on.   The story at that time was that Benioff was considering a move to Azure.  Shortly after that hit the press, Nadella showed up at Dreamforce for a guest-speaking role.  Needless to say a few of us got a little uncomfortable with the thought of the two competitors playing nicely together but not much came of it and Nadella continued to make significant investments in the Microsoft Dynamics 365 product line.

My take on this and a few other shots that Benioff has been taking at Nadella is that it’s not been easy for him to watch Microsoft become the bigger fish in the pond.  Additionally, he seems to be losing deals to Microsoft.  Enter the LinkedIn deal.  From where I sit, that was a significant strategic win for Microsoft and not so great for Salesforce.  I suspect that is why he’s been recruiting some from the Microsoft team.  Maybe he is trying to learn how to win against Nadella.  Unfortunately, so far, it looks like that investment is NOT paying off.

I don’t personally know Satya Nadella, but based on what I’ve seen, he doesn’t strike me as the type of person who will remain quiet for an extended period of time while Benioff takes shots at him and Microsoft.  Having said that, I also don’t see him as a reactionary type person either.

I plan to keep an eye on this skirmish because; it does seem possible to me that Satya might take a few jabs back in the not too distant future and I’m sure I will derive some entertainment from it. On the other hand, I can also see how Satya might not have time to concern himself with this because, unlike Salesforce.com is to SalesForce, the Dynamics 365 product line is just one arrow in the Microsoft quiver.

I’m looking forward to Round Two. 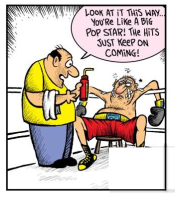 A few additional articles for your reading pleasure.
After Microsoft’s Dazzling Q4, Can Amazon Or Salesforce Catch Up In The Cloud?
Microsoft to Salesforce: Game on
Salesforce CEO Marc Benioff: ‘The new Microsoft is actually the old Microsoft
(Read between the lines.  He’s basically admitting to getting out foxed a bit.)